Conor is a 13 to 14-year-old boy from Trunswick, Eura. He is the summoner of Briggan the Wolf, and one of the four main protagonists of the series, along with Abeke, Meilin, and Rollan. Conor is considered the loyal leader of the Four.

Conor is the tallest, largest, and heaviest of the Four Fallen summoners, as stated in The Dragon's Eye. He has a friendly, open face, golden-blond hair, blue eyes[3][4] (they have also been described as green instead[5]), and wears tattered clothes, a belt and a green cloak. Briggan's tattoo is on the back of one of his forearms (it has also been described to be on his bicep as well). He also has 'worn-out shepherd's hands', according to Rollan.[6] In Wild Born, it was stated that he is taller than Meilin.[7] In the second series, he is temporarily infected with a Wyrm parasite, which leaves him with a faint scar on his forehead in the shape of a spiral.[8] In combat, Conor often wields an axe. On cover art, he is also shown with a shepherd's staff.

Conor is thirteen to fourteen years old and is the youngest son of Fenray. Like his father and his two older brothers, he herded sheep, and also became very knowledgeable about the shepherd lifestyle. At one point, however, Conor was put into service under Devin Trunswick in order to pay off a debt his family owed the Trunswick family. Conor was shown to not have much confidence in himself, as he did not expect to summon a spirit animal at his Nectar Ceremony, and when he summons Briggan the Wolf, a Great Beast, he initially believes that his bond to the wolf was a mistake and not meant for him. Despite this, he and Briggan quickly become very close. His bond to Briggan gives Conor heightened senses and allows him to have prophetic dreams, as revealed when he has a vision of Arax the Ram in Wild Born. One trait Conor has always held is his love for his family, which is so important to him that he decides to give up the Iron Boar to keep his family safe. He is also very loyal, especially to the Greencloaks and their cause. He was described to be shy by Rollan, who also believes that he can be too trustworthy of others due to his kind manner. Although he is sometimes snubbed by his friends for being a simple shepherd boy, he seldom gets angry and knows how to ease tension among the group. Due to his background of herding sheep, or perhaps because of his bond to Briggan (who was a pack leader), Conor is shown to have a strong sense of leadership. By the end of the series, he changes from a shy, modest boy to the leader of the group. His leadership role becomes especially prominent after Tarik is killed in Rise and Fall. Though Conor can still doubt himself, he becomes much more confident in his abilities by the second series. He may have romantic feelings for Abeke.

Conor is first shown in the training room at Greenhaven. He offers a smile towards Abeke when she is late. When Tarik tells the Fallen to use everyday weapons. Rollan jokes that he did that every day in his old life while Meilin argues that she could do better with her bare hands. Conor and Abeke exchange glances, then go to get weapons without complaining. After he plays a major role in convincing the lord to free Rumfuss the Boar and earns the Iron Boar talisman. Towards the end of the book, Dawson approaches him, reading him a letter about how his family was struggling. The deal was that Conor would give him the Iron Boar so his family's debt would be forgiven. He did give away the talisman, causing Meilin to go to Zhong.

Conor is blamed for giving the Conquerors the Iron Boar to save his family. Rollan especially teases him about it. Conor is forgiven by Abeke. Soon after, Rollan gets the Sunset Death. He and Abeke have a task to get banana gourds or Rollan will die.

A parasite wriggles its way into a cut on Conor's arm. He greets Meilin at Greenhaven and discusses the parasite in his arm. He travels with Takoda, Meilin, and Kovo to the Petral Mountains. He finds the ruins with them, and travels down to Sadre. When Meilin falls out of sight into the Many, Conor calls out for her before one of the Infected crawls into the cave. He is then saved by Xanthe and asks who she is.

The parasite progresses further up Conor's arm. He momentarily loses control and Xanthe realizes that he is infected. Meilin and Takoda convince Xanthe to stay with the group, despite her initial trepidation. The group comes to a fork in the road (or cave, rather) and ends up having to go right, taking the long way around. They attempt to cross the Archane Fields, but Takoda accidentally sets it on fire, accidentally separating Xanthe from the rest of the group. Conor, Meilin, and Takoda end up in the Sulfur Sea without a guide.

Conor, Meilin, and Takoda wait for Xanthe for a couple of days, before eventually moves forward, having realized she was not coming back. Conor uses his connection with the Wyrm to help direct the group towards it, in the absence of Xanthe, who had been their guide. Later, Conor senses the pirates with Briggan's help/enhanced senses, and tells the rest of the group. After managing to convince them, they hold up a torch, trying to get the pirates to notice them. They succeed, and are allowed to board the pirates' ship.

Conor is under the control of the Wyrm. He breaks free of the chains Meilin and Takoda had put him in and leads an army of The Many into battle with them. The Wyrm awakens in this battle, and Xanthe (their guide) returns. They ring the bell on the tower, but the mechanism stops. The Wyrm travels into the volcano where Abeke and Rollan are with the Redcloaks, and goes into Zerif. Abeke rings the bell in the volcano and makes the tides and spirit bonds turn. They defeat the Wyrm, and are reunited, though Meilin and Rollan are a bit... awkward when meeting each other again, that is, until Jhi comes up and bumps Meilin, forcing them into a hug.

Conor, Abeke, Rollan, and Meilin all receive a summon from Olvan, inviting them to a conference held by all of the nations of Erdas. At the conference, the leaders are attacked by "Fakecloaks," people pretending to be Greencloaks, and the Emperor of Zhong is killed. Princess Song orders the Oathbound to capture the Greencloaks. Conor, Rollan, Abeke, and Meilin run with Olvan and lock themselves in a room, at which point Olvan gives them the Heart of the Land and instructs them to reveal it, before being bitten by Brunhild the Merry's spirit animal, a stone viper, which turns Olvan into stone. They manage to escape with the help of Anka and her chameleon spirit animal. They run from the Oathbound for several days, and board a ship to Amaya. Conor and Rollan both attempt to sleep on the cots on the ship, but Conor has a nightmare about the Wyrm. Abeke kisses the mark on his forehead left by the parasite, effectively stopping the nightmares.

-To Abeke, for not helping her battle four adult Greencloaks in a training session in Greenhaven, Hunted

-To Abeke, Meilin, and Rollan about aiding the Greencloak supporters in the battle at the Howling House, Hunted

-To Rollan, about wearing a kilt in Glengavin, Hunted

Google Translated *disclaimer: all of these were put through Google translate, and are not accurate to real life.[]

Conor on the cover of Wild Born 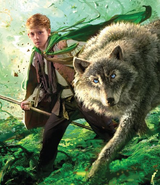 Conor on the cover of Hunted

Conor on the cover of Rise and Fall

Conor on the cover of The Evertree 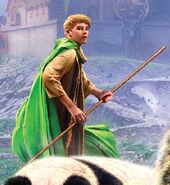 Conor on the cover of Immortal Guardians

Conor on the cover of The Wildcat's Claw

Conor on the cover of The Dragon's Eye