Essix is a gyrfalcon Great Beast, and Rollan's spirit animal. She is one of the Four Fallen, and the patron beast for the continent of Amaya.

Essix is a brown morph gyrfalcon[1] (although sometimes just simply referred to as a falcon), with speckles on her breast and amber eyes. She is one of the Great Beasts, and is summoned by Rollan. She is the last spirit animal out of the four to be introduced; thanks to her ability to notice even the smallest detail, she is called Deepseer. She is a free and independent bird that doesn't come to Rollan when called, unless it's necessary or if she wants to. Other characters often trust Essix's powers to see if someone is what they seem.

Main article: Talismans
Essix's talisman is the Copper Falcon. It strengthens the user's eyesight. In the game it gives you 20% ranged attack (bow) damage.

Essix is summoned by Rollan unexpectedly while he was in jail. Almost immediately after, Zerif introduces himself to Rollan and pays his bail. Essix and Rollan leave with Zerif, but Rollan suspects that Zerif was not who he seemed. He distracts the man and makes a run for it, successfully escaping with the help of Olvan's sudden appearance. Olvan takes Rollan and Essix to Greenhaven, where they are introduced to the other Four Fallen (minus Uraza). Rollan soon learns that Essix is very independent and refuses to listen to his commands, but she also enhances his intuition and agility.

When Rollan and Conor are imprisoned in Trunswick, Essix is left out of dormant form and finds the rest of the group, and they realize something bad has happened to Rollan and Conor.

Rollan and Essix are both loners at heart, and from the from the start Essix wouldn't listen to most of her summoner's commands. However Essix would not abandon him right times in danger and stays close to him when it is necessary, showing that she cares about him. She seems to like giving Rollan a hard time, but does so affectionately. She also enhances Rollan's vision and intuition when close. While traveling through Arctica in Fire and Ice, Essix steals a piece of jerky from Rollan's hands, and feeds it to him like he was a baby bird. Rollan often longs to be physically close to Essix throughout this book, but respects that his spirit animal is independent by nature. When the group frees Suka, Essix is transformed into Great Essix with a talisman and carries Rollan through the air. During that time they grow a closer bond, and by the end of the book Essix finally adopts her dormant form; a tattoo over his heart.

Essix and Cabaro seem to have a small rivalry, as shown in Tales of the Great Beasts, when they throw insults at each other. 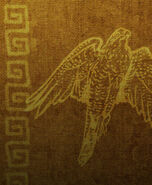 The flag of Amaya, which features Essix

Essix on the cover of Wild Born 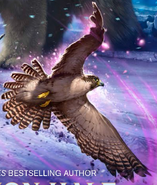 Essix on the cover of Fire and Ice 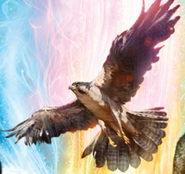 Essix on the cover of Tales of the Great Beasts

Essix on the cover of The Evertree 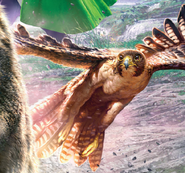 Essix on the cover of Immortal Guardians

Essix on the cover of Broken Ground 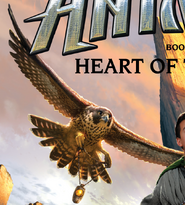 Retrieved from "https://spiritanimals.fandom.com/wiki/Essix?oldid=29184"
Community content is available under CC-BY-SA unless otherwise noted.