The 'Four Fallen' is a term used for Briggan the Wolf, Uraza the Leopard, Jhi the Panda, and Essix the Falcon, the four Great Beasts who sacrificed themselves (or 'fell') in the First Devourer War. 'Four Fallen' could also refer to the Fallens' human partners: Conor, Abeke, Meilin, and Rollan.

The Four Fallen on the cover of Wild Born 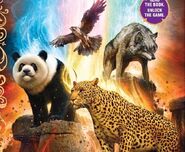 Retrieved from "https://spiritanimals.fandom.com/wiki/Four_Fallen?oldid=27737"
Community content is available under CC-BY-SA unless otherwise noted.