King Cobra (although she is also referred to as a Serpent)

The Great Beasts
The Wyrm

First series: Wild Born, Fire and Ice, Against the Tide, Rise and Fall, The Evertree
Special Editions: Tales of the Great Beasts, The Book of Shane Trilogy, Tales of the Fallen Beasts

Gerathon is a king cobra Great Beast. She is one of the two Great Beasts that controlled the The Devourer in the first war, the other being Kovo the Ape. She also created the Bile, which is made using her talisman, The Jade Serpent.

In the second series, she is summoned as a spirit animal by a girl named Raisha.

Gerathon is a huge cobra with black scales[1], a yellow underbelly[2] and black eyes with a gold rim.[3] She was also mentioned to weigh over 2 tons. She is considered very dangerous and apparently cares little for human lives, though she values her own life and seems to want to avoid death, possibly due to the ordeals she went through while imprisoned.

She can send her conscience to anyone who has drank the Bile and control them; however the control can also be broken if the person's willpower is strong enough (ex. Meilin and Aidana). Tellun also has the power to cure any person from the Bile without breaking their bond with their spirit animal which he did for Meilin and Shane in The Evertree.

Main article: Talismans
Gerathon's talisman is the Jade Serpent. It creates and controls the Bile.

In the last chapter, although not named, she is freed from her prison.

In the first chapter, she kills her freer right after he frees her. She also killed a Niloan lady who was sleeping. She also took control of Rollan's mother, Aidana, and tried to force her to kill Rollan.

She appears in the first chapter visiting Kovo's prison at Muttering Rock as a young boy with a buzzard spirit animal. She tells Kovo that the Conquerors almost have enough talismans to free him. It is revealed in this book that she also has control over Meilin.

Gerathon appears in this book to help the Conquerors retrieve Cabaro the Lion's talisman. She kills Drina by controlling Iskos, injures Tarik by biting him in the thigh and battles Cabaro.

Gerathon appears at Muttering Rock along with Kovo and Halawir. When Shane asked for the Staff of Cycles, she agrees with Kovo not to give it to him. When Shane calls her a coward, she threatens to kill him. In chapter 19, she is forced by Suka the Polar Bear into The Evertree to sacrifice herself.

Tales of the Fallen Beasts[]

Gerathon was summoned by Raisha, a loyal servant of Zerif. Raisha summoned Gerathon in a prison in Zhong, and then a Greencloak named Dorell (who also serves Zerif) helped her escape. However, Dorell turned on them, and Gerathon killed him and his spirit animal. Raisha blacks out and then wakes up to Zerif's voice. Zerif told her that he knew that she'd summon a Great Beast. Even after Raisha's loyal actions, Zerif took Gerathon as another stolen Great Beast.

Despite Gerathon's earlier disdain for humans, she appears to be close to Raisha. They respect each other, and Raisha is not afraid of her spirit animal, and even seems to like her. When Gerathon killed Dorell, Dorell asks why, and Raisha responds that she trusts the cobra. Gerathon attempts to free herself to help Raisha when she is cornered by Zerif. 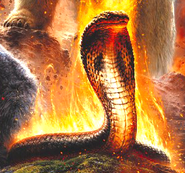 Gerathon on the cover of Tales of the Fallen Beasts