Spirit Animals Wiki
Register
Don't have an account?
Sign In
Advertisement
in: Great Beast, Rise and Fall Characters, Tales of the Great Beasts Characters,
and 17 more

The Great Beasts
The Wyrm

First series: Rise and Fall, The Evertree
Second series: Immortal Guardians, The Return, The Burning Tide
Special editions: Tales of the Great Beasts, Tales of the Fallen Beasts, The Book of Shane

Halawir is an eagle Great Beast. In Fall of the Beasts, he is summoned as a spirit animal by a girl named Cordalles.

Halawir is an eagle with yellow eyes[1] and blue-gray feathers under his wings.[2] He is one of the most respected Great Beasts. It was said by Essix that only Tellun the Elk held more respect than the eagle. He has a haughty and independent personality, as he became defensive when Essix asked him about his missing talisman, and openly tries to resent his and Cordalles' bond. He was the guardian of Kovo the Ape's prison at Muttering Rock. At some time during the series, Halawir sided with the Conquerors because he was sympathetic towards Stetriol; It could also be because Kovo persuaded him. Halawir also has power over the winds, similar to Arax the Ram.
As revealed in The Book of Shane, Halawir may have been the one to hide the talismans after the first great war, which could explain why he knew where Suka the Polar Bear and her talisman were. He was also the one to convince Cabaro the Lion not to fight in the first war.

Main article: Talismans
Halawir's talisman is the Bronze Eagle. It allows the wearer to 'nudge' the air around them, as one's hand might divert water in a stream.

Halawir is mentioned when Suka the Polar Bear reveals that he had come to Arctica to ask for her talisman. She jokes that she sent him on his way "minus a few tail-feathers".

Halawir helped Shane steal the talismans from Greenhaven (with the exception of the Granite Ram and the Coral Octopus) and prevents Abeke from getting back the talismans as they flee. It is revealed by Olvan that he betrayed the Great Beasts by taking the Conquerors' side.

Halawir appeared, along with the rest of the Great Beasts, as Kovo summoned all of them to The Evertree (landmark). As a battle breaks out, Essix and Ninani attack Halawir; with the help of Uraza and Mulop, Arax is able to ram Halawir into the Evertree, the impact killing both of them.

The Book of Shane[]

This book is set directly after Rise and Fall, where Halawir is flying away from Greenhaven with Shane on his back. They dodge ship cannons, and when Shane requests to be dropped off, Halawir drops him onto a Niloan island.

Tales of the Fallen Beasts[]

Halawir appears in the first chapter, and is summoned back to Erdas by a girl named Cordalles. Whilst Halawir is flying he is caught in a net by Cordalles' father, Imari. At the arrival of Halawir, Cordalles' mother wants to take him to Greenhaven. He at first hates Cordalles for restraining him and attempts to avoid their bond and escape once they get to Greenhaven. He showed that not even his strong willpower can resist a bond since, when Cordalles let him go when Raisha was holding her, he felt a stone in his stomach weighing him down. He returned to rescue Cordallles by pulling Raisha's hair. Raisha let go of Cordalles and Halawir gave her all the power he could to run away; but was then captured by Zerif and infected with the Wyrm parasite. His last memory was when he saw Cordalles return for him and Zerif grab her as a Redcloak arrived to rescue her.

Tales of the Great Beasts[]

Halawir on the cover of Tales of the Fallen Beasts 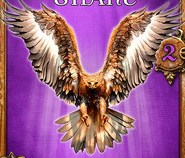 Halawir on the cover of Vendetta

Halawir on the cover of The Burning Tide

Fanart by H-awky. May contain inaccurate elements. Here he is seen as a bald eagle instead of a golden eagle.