Immortal Guardians is the first book in the Fall of the Beasts series. It is written by Eliot Schrefer. Conor, Meilin, Briggan, Essix, and Jhi are depicted on the cover.

A new threat faces the world of Erdas in this continuation of the New York Times bestselling series.

In the world of Erdas, every child must discover if they will summon a spirit animal, a rare and incredible gift. Conor, Abeke, Meilin, and Rollan were rare even among those few. They summoned four animals who were once Great Beasts, immortal guardians who sacrificed everything to end a brutal war.

Now, in the wake of that sacrifice, more children are appearing all across Erdas who are connected to these legendary beings. But something else lurks in the shadows of this hard-won peace.

A dark force is hunting the Great Beasts, just as the world is rebuilding. Older and more powerful than even the Great Beasts themselves, it has slept for centuries beneath the surface of the world. Now it has awakened ...and if the young heroes can't stop it, it will consume everything.

The book begins in Zhong, when a girl named Kaiina summons Dinesh the Elephant. However, Zerif arrives and uses other controlled Great Beast spirit animals to help him enslave Dinesh using a Wyrm parasite.

Meilin returns from Zhong to Greenhaven and discovers spirit animal Kovo imprisoned in the courtyard. His partner Takoda, rescued from Zerif by Conor, was with him. Kovo draws a disturbing image for them. The four heroes go to Greenhaven's library where Erlan takes them into a secret room with a book that shows them they have to go to the Petral Mountains.

Conor reveals that a piece of a Wyrm parasite got inside a cut on his wrist during the recovery of Kovo and is traveling up his arm to his head, where it will eventually turn him into a Many-like creature. It was at Conor's elbow at the time. Jhi attempted to destroy the parasite that night, but only managed to slow its progress.

The next morning, the team decided that Rollan and Abeke should go to find the other Great Beasts before Zerif could, and that Conor and Meilin should find the mysterious door in the Petrals.

Takoda, Kovo, Meilin, Conor, Briggan, Olvan, and Greencloak escorts trek across the Petral foothills. Kovo is still restrained, as he wears a collar attached to long poles with two Greencloaks holding them. Kovo escapes and Takoda, Meilin, Conor, and Briggan chase him and get separated from the other Greencloaks. They reach an abandoned city and cross a moat trap into it, finding a mouthlike cave opening with a spiral carved into the overhang: the door. The group enters and Kovo breaks down a door in the tunnel, which starts to collapse the tunnel. They run, collapse, then find a corridor continuing on.

Abeke and Rollan sail to Eura to find a Great Beast. When they land, they track a yak herd for people who might hunt it. They are attacked by mountain lions and Abeke gets injured. She saves a calf from the cats then collapses, and is surrounded by armed people.

The other team walk on and decide to enter a passageway too narrow for Kovo. Kovo allows Takoda to take him into the passive state so they can enter. Meilin decides to scout ahead. She is attacked by mysterious creatures.

One of them finds Conor and Takoda. More arrive and the group fights, and Xanthe saves them. She reveals the creatures are the Many. They are reunited with Meilin, who was also saved by Xanthe. Xanthe is awed by the fact the group is from aboveground.

Rollan and Abeke are rescued by the armed people and Abeke wakes up healed at their camp. She meets Anda (who summoned Tellun) and Tellun. Rollan, Abeke, and Anda leave the tribe's camp for Greenhaven.

The others head to Phos Astos. Xanthe is surprised they do not know of it and reveals it is part of a network of underground cities. She also says the Many were once Sadreans. They use an updraft to land on a net and arrive on the city. They meet the elders who claim their aboveground counterparts had a weapon that could stop the Wyrm. However, they died out long ago. Later, the Many attack. Then Kovo opens a water gate and washes away the Many.

Anda, Rollan, and Abeke head towards Greenhaven. After setting camp, eventually they get ambushed by Zerif. The other group feasts at Xanthe's house. They later sleep, but Meilin wakes to find the Many are within the city. The heroes escape with Xanthe, but the city falls. Rollan, Abeke, and Tellun fight Zerif and his possessed Great Beasts. Zerif captures Tellun, but a Redcloak- later suggested to be King- saves Anda, Rollan, and Abeke. Zerif retreats and the Redcloak pursues him. The heroes are momentarily safe, but worried about telling Anda about Tellun's capture. Meanwhile, the others begin to journey through tunnels left from the Evertree to reach the Evertree from below ground so they can stop the Wyrm. 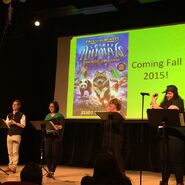 Wallpaper
Add a photo to this gallery

TALES OF THE GREAT BEASTS

THE BOOK OF SHANE

Fall of the Beasts (Series 2)

TALES OF THE FALLEN BEASTS

HEART OF THE LAND

THE DRAGON'S EYE
</div></div>
Retrieved from "https://spiritanimals.fandom.com/wiki/Immortal_Guardians?oldid=25350"
Community content is available under CC-BY-SA unless otherwise noted.