Rise and Fall, The Book of Shane: Venom, the Spirit Animals Game

Iskos is a spider and Drina's spirit animal. He appears as a boss in the Spirit Animals Game, alongside his human partner.

Iskos is a large male spider, who is black with yellow stripes on his abdomen. In Rise and Fall, he was described as being the size of a seagull, though in the game he is much larger; he is also shown to be poisonous in the books. He is the only arachnid spirit animal introduced in the series.

Drina summoned Iskos in her sleep, and woke to find the spider in the corner of her room. Shane states that the people of Stetriol think that their royal family is "cursed" because all of them summoned spirit animals; and for many, Iskos was the "last straw". Though he is feared by most, Iskos seems to have a good relationship with Drina. Drina's caregiver, Magda, also acts indifferent to the spider, sweeping his webs away from Drina's room every morning without complaint.

Iskos is present alongside Drina as The Conquerors sail for their headquarters in Nilo. He is again seen at the Conqueror meeting. As payment for all of Drina's losses to the Keeper of Greenhaven, Iskos, while being controlled by Gerathon the Serpent, kills Drina. Drina was bitten on her wrist, causing blood to flow loosely. Even without the poison, the book states, the wound would've killed her anyway. It is unknown what happened to Iskos in the aftermath.

The Book of Shane

In the first book, Venom, Drina summons Iskos in her sleep, causing her to scream when she wakes up and sees him. Shane runs to his sister's room and picks up a lantern to throw at Iskos, but Drina stops him, realizing that Iskos is her spirit animal. He's mentioned several times throughout the book, by Shane's fear of him.

Iskos appears when Drina leads you to a small bridge in the area. When you follow her, you are trapped between Iskos and Drina. Red spots will appear all around you, so it's best to keep moving, as they have a tendency to pinpoint where you were last time. If you get stuck in one of the red spots, your health will go down as Iskos hurts you. There are different places where the red spots will appear so be careful, once Drina gets exhausted she will eventually disappear and you have to dodge the red spots. Later she traps you in webs and you have to run in circles while Iskos tries to trap you with webs. Try not to attack her when she's shoot poison arrows. Your Spirit Animal can but you should try to refrain from doing so. 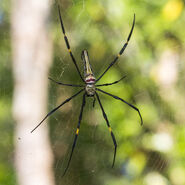 A golden silk orb-weaver spider, a genus of spiders that Iskos is likely based on (image source).
Add a photo to this gallery

Retrieved from "https://spiritanimals.fandom.com/wiki/Iskos?oldid=27712"
Community content is available under CC-BY-SA unless otherwise noted.