Meilin is a 13 to 14-year-old girl from Jano Rion, Zhong. She is the summoner of Jhi the Panda, and one of the four main protagonists of the series, along with Conor, Abeke, and Rollan. The Four consider Meilin the warrior of the group.

Meilin is stunningly beautiful. Being the daughter of a very high-ranked Zhongese general, General Teng, she wears expensive clothing. She has dark, angular eyes, long black hair that she usually wears braided, tied up in a bun, or loose to hang down her back, and is shorter than both Conor and Rollan.[2] It was stated that she likes and prefers to do her own makeup on special occasions. Jhi's tattoo is on the back of one of her hands, and she also wears a green cloak, since she joined the Greencloaks. As revealed in Immortal Guardians, she has shoulders even narrower than Takoda's. When exploring Sadre, Meilin burns some of her own hair.
However, her accurate appearance still remains a mystery, as the looks of her changed throughout the books, though they do have a bit more consistency in The Evertree, The Return, and The Dragon’s Eye. Quoting from multiple users: “Meilin’s Asian features were less... pronounced after the Wild Born cover.”

Meilin is the only child born to a family of great warriors in Zhong. Her father, General Teng, was one of the esteemed five High Commanders of the Zhongese military. Coming from a proud lineage, Meilin took private lessons in battling technique similar to karate under an expert known as Master Chu. She was eventually able to best him without a scratch, showing a natural talent just as predicted by her family line. Due to her family's high status and wealth, she has employed many servants, including a kind, gentle handmaiden named Kusha.
Not only does Meilin possess natural fighting talent, but she is also notably beautiful and composed. It has been said about her that, "she had never needed paint on her face to earn compliments . . . she possessed an allure beyond . . . natural beauty." She is well practiced in acting as well, and has the ability to make many different expressions ranging from a shy smile, to a confident dazzling smile, to a stormy scowl. It's later implied that Meilin had not actually liked the strict environment of aristocrat Zhong; she wanted to be a warrior rather than a public figure, and disapproved of the rule that women cannot join the Zhongese military. She was sympathetic with Princess Song because of this.
Meilin frequently worries about Zhong after the invasion of Jano Rion, which she witnessed firsthand. To begin with, she often does not feel like the Greencloaks' decisions are relevant if they are not helping to expel the invaders from Zhong. At the end of Hunted and throughout Blood Ties, Meilin leaves the group to return to Zhong for a short while, before she comes to understand that the Greencloaks need her and Jhi. While still passionate about saving her homeland, Meilin is more eager to help the cause, even if not to free Zhong. She becomes very loyal to the Greencloaks, and although she clashes with them at first, she trusts the other Heroes. She cares and worries deeply for Abeke and Conor, and she also is shown to have romantic feelings for Rollan, which he returns. Tarik's death also deeply affected Meilin, as it did the other Heroes.
In Against the Tide, it is revealed that General Teng had given Meilin the Bile instead of the Nectar at her Nectar Ceremony. Meilin becomes extremely guilty, because the Bile made her and Jhi's bond very one-sided from the start. She was also controlled by Gerathon the Serpent to betray the Heroes, and even injures Abeke unconsciously, which horrifies her. Despite being in danger and susceptible to Gerathon's control, she still sides wholeheartedly with the Greencloaks, showing how loyal she is to her companions.

Meilin is first seen in Wild Born in the chapter "Jhi", where she summoned Jhi. The chapter opened up showing Meilin getting ready for her Nectar Ceremony. Her father is revealed to be General Teng, a high commander in the military. She was late for the Ceremony and wanted to be a little late on purpose so all eyes would be on her.
General Chin then came in and informed her that they were at war, and the city of Shar Liwao had fallen and the Zhongese invasion had begun. Meilin tried not to panic and attended her ceremony, where she was able to summon Jhi. It was noted she had hoped for something else other than a panda, something that would enhance her fighting skills.
Even though Meilin was nice and caring, she often got disappointed about Jhi. It was stated in one chapter "It was easy for Rollan and Conor to have faith in their animals, they had swift ones . . ." It may not be exact, but the idea revolves around the main thing stating that Meilin underestimated what Jhi was capable of. As usual Jhi was a little lazy and prefers passive state.

At the beginning of the book, Meilin is told that Zhong had been taken by the Conquerors, and her father is missing. Initially, Meilin decides that she is going to go back to Zhong to find her father, and see if she can save what little is left of Zhong. Another Greencloak, Finn, helps her to realize that if she left for Zhong, there would be no way Zhong would ever be saved. Also, she develops a stronger bond with Jhi, finding that Jhi can help her think clearly. Meilin has neutral feelings about Conor and Rollan. She is wary of Abeke, though as she insinuated she wanted the Conquerors to find them. At the end of the book, Meilin is upset because Conor gave away the Iron Boar for his family. She decides that she will leave for the sake of her family and home.

The book starts off with Meilin trying to find her way through the Great Bamboo Maze. She meets Xue, a former Greencloak, who helps her and gives her advice. She reunites with the others—Tarik, Rollan, Conor, and Abeke—and has a battle against the Conquerors. Her father is killed fighting a crocodile. They win this battle.

Meilin is distraught over her father’s death. She felt anger and enraged. Of course, Jhi calms her but she doesn't want to be calm. When seeing Shane, she is furious because he's "the Devourer's errand boy". Seeing Abeke hug him made her even more skeptical about how deeply Abeke's conversion to the Greencloaks' runs. Her friendship with Rollan becomes stronger on their journey to retrieve the Crystal Polar Bear. She and Rollan hold hands.

Throughout the book, she suspects everyone else of being the mole, especially Abeke. It is later revealed that she was unknowingly the mole. Gerathon could see through her eyes and take over her body ("sleepwalking") because she was tricked by her father into drinking the Bile. It is revealed that Jhi knew that she was summoned because of a forced bond.

Meilin tries to fight the Bile, but can only do it for a short time. She manages to help Abeke escape before the Bile takes over her again. Meilin then shackles herself and drops the key in one of the bow quivers. Jhi lays down beside her and comforts Meilin while they wait to be discovered by approaching guards.

Gerathon keeps Meilin's cell door open, taunting her freedom. Shane later comes back and Meilin realizes that Shane is the Devourer. Meilin is forced to fight her friends on the battlefield. Rollan manages to snap her out of it for a long time. When the group runs into Tellun, he cures her of the Bile's influence, In his joy, Rollan kissed Meilin for the first time.

Meilin is seen at Greenhaven after Rollan sent her a letter telling her the Evertree was sick. She arrives at Greenhaven and is tackled by Briggan. She tells Conor to “get this oversized dog of me!” But instead Conor, Abeke and Rollan join her rolling on the ground. The 4 friends head into Greenhaven to discuss Kovo and the parasites. Then Meilin takes them to the Greenhaven Library where they meet Erlan. He shows them the hidden section of the library with books about Stetriol and The Wyrm. They find a picture of the doorway Kovo drew earlier and a map saying it is in the Petral Mountains. She travels with Conor, Olvan, Takoda, and Kovo to the Petral Mountains. Meilin follows Kovo to the ruins and the entrance to Sadre. When they get trapped underground, Meilin goes through a small tunnel to find a way through and falls into The Many.

Meilin is traveling in Sadre. When Conor become temporarily possessed by the Wyrm, she helps him snap out of it and takes care of him. She watches Takoda and Xanthe, and she feels jealous.

*disclaimer: all of these were put through Google Translate, these are not accurate to real life.

Meilin on the cover of Wild Born 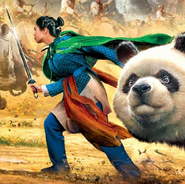 Meilin on the cover of Blood Ties

Meilin on the cover of The Evertree

Meilin on the cover of Immortal Guardians

Meilin on the cover of The Return

Meilin on the cover of The Dragon’s Eye