Wild Born, Blood Ties, Fire and Ice, Against the Tide, Rise and Fall, The Evertree, Immortal Guardians, Broken Ground, The Return, The Burning Tide, The Book of Shane

Shane, or The Devourer, was a 15-year-old boy and the main antagonist of the first arc. In the Fall of the Beasts arc, he leads The Redcloaks under the name King. In The Burning Tide, he dies to save Abeke from a possessed Uraza.

Shane was born on the island continent of Stetriol, and is the only son and heir of the country's king, King Irwyn. He grew up in Stetriol's harsh conditions and society (he described himself in the Book of Shane #1 as 'the poorest prince in the world'.) and watched as his family was plagued by the Bonding sickness, which gave him a reluctance of summoning a spirit animal in fear of catching the sickness. However he later does gain a bond to a spirit animal with persuasion from Zerif; a saltwater crocodile named Grahv. He is mostly close to his family members, especially his sister Drina and his mother. He was tutored by the Conquerors' seer, Yumaris, and was apparently trained for combat by his uncle General Gar.

Shane's goal was to help Stetriol and its people. Using this goal, Kovo and Gerathon were able to manipulate him into gathering an army (The Conquerors) and waging war with the Greencloaks. For most of the first series, Shane's true identity (The Devourer/The Reptile King) was hidden and his uncle Gar posed as him instead. Shane thought that he was helping his people by commanding the Conquerors, but in reality it was only allowing Kovo to pursue his goal of taking over Erdas. Because of the destruction he has spread throughout Erdas, Shane gained many enemies and lost many loved ones, including his remaining family members and Abeke, his closest friend. With the eventual defeat of the Conquerors at the end of the first series, Shane still continues to pursue his goal of helping Stetriol. He does regret some of the things he has done in the past and accepts whatever judgement he receives.

In the second series, Shane gathers a group of allies (The Redcloaks), which he leads against Zerif and The Wyrm.

He has notable parallels to King Feliandor, his ancestor and the first Devourer; they both wanted to make Stetriol great, and they both summoned a saltwater crocodile via the Bile. Unlike Feliandor, however, Shane does not bow to Kovo in the end. Shane was made to be a mysterious character on purpose, and Nick Eliopulos (author of The Book of Shane) described him as being "on the fence" between good and bad. He is very clever, dutiful, and can be a bit cynical and sarcastic, as shown by his thoughts.

Worthy describes Shane as a good leader, and thinks that Shane had been love with Abeke, even if he did not admit it to himself.

Shane is a pale, handsome boy with a slight build.[1] He has blond hair,[2] blue eyes, and an intense gaze (as described by Abeke)[3] and he is tall for his age. He is one year older than the Heroes of Erdas at the beginning of the series. He also has broad shoulders, and Grahv's tattoo covers his chest, though in the Book of Shane it is revealed the tattoo has become a waxy scar.

As King, Shane wears a white mask, a red cloak, and has reptile skin-like armor on his arms. In The Return, it was revealed that his eyes became yellow and crocodile-like.

Shane is introduced as Abeke's trainer and General Gar's nephew. In a training session, he tests Abeke's skill by staging a fake invasion. Abeke, who thought the invasion was real, defeats a hired Conqueror with hardly any effort. Shane tells her to stop attacking and that it was staged. He is impressed by her fighting skills, but apologizes when Abeke tells him to never do something like that again.

Later, Abeke hides from Shane in a tree as he calls for her. When he admits that he gave up on finding her, she climbs down from her tree. Shane tells her that a very special visitor was here, his uncle Gar, (he does not tell her Gar is the Devourer.) When they arrive, Abeke is introduced to Gar and Gar explains the Conquerors' motives to her. Shane helps explain as well, and even begins to tear up as he talks about Stetriol. Abeke agrees to help them find Arax's talisman.

At the battle with Arax in Amaya, Shane appears again and duels Meilin. He overwhelms her easily, and tells her that she should give up. But when the Conquerors begin to lose and Abeke switches sides to the Greencloaks, Shane retreats alongside Zerif.

Shane blocks a blow from a Conqueror soldier during a battle in Zhong, saving Abeke's life. Conor spots the way Abeke and Shane look at each other, asking Abeke who Shane was.

Shane is spotted by the Greencloaks at Pia's house in Samis. When Shane and Abeke embrace, it is a clear representative of the indecisive nature that Abeke constantly tries to disguise.

Shane is seen at the end of the book, telling the Conquerors to be gentle when shackling Abeke.

Shane is first seen coming down to check on Abeke and Meilin, who have been taken prisoner. He apologizes for their conditions, then takes them to the above deck of the ship they're riding. He mocks Drina, then tries to keep Zerif from shoving Meilin and Abeke into the sea. He shouts to them that the shore isn't far. Later, he brings them to a Conqueror meeting with his uncle Gar and Gerathon, revealing he has been told to kill Meilin and Abeke if they refuse to follow his orders.

Once out of their cell, he is horrified to watch his sister be killed by her spirit animal, a spider called Iskos. He mouths to Abeke, counting down to their escape, then knocks out the Conqueror seer, Yumaris. He leads them to an archway and helps them defeat the guards stationed there. He tells them to grab the biggest boxes they can, then leads Abeke to his family ship to escape; leaving Meilin behind, as she is afraid that Gerathon will use her influence over her to undermine the Greencloaks' plans. Once on the ship he confesses his anxiety about going to the main Greencloak base to Abeke, who assures him that she will make them listen to him.

Once in Greenhaven, he appears surrendering as the Greencloaks surround him, but grows extremely nervous once Rollan corners Shane about his spirit animal. With trembling hands, he finally gives in and shows them his tattoo, which is a giant saltwater crocodile, revealing him to be the true Devourer. He turns to Abeke, his expression unreadable, then summons his spirit animal and rampages through Greenhaven towards Tarik's casket, then steals most of the talismans, but is almost killed in the process. He is only saved by Halawir's arrival, where they snatch up most of the Greencloak's talismans (excluding the Coral Octopus and the Granite Ram) and they escape. He is only mentioned afterwards and doesn't appear again.

Shane reveals to Meilin that he is the Devourer, causing her to attack him. Afterwards, Shane leads the Conquerors into battle against the Greencloak forces. After enduring a heart wrenching duel with Abeke, he turns his attention to Meilin, realizing that she is able to resist the Bile, and threatens both her and Gerathon. When the four teammates realize Shane has been controlled all along, they quickly retreat. Shane is later seen at Muttering Rock, where he learns that Kovo has been using him. Shane joins the team with his hands tied behind his back, however, within hours he flees, and Abeke tells the others to allow him to do so.

The Book of Shane

Shane meets Zerif, the Bile is made, and the war is just about to begin. Talks mainly about when he was younger and had not became the Devourer yet.

Shane turns 13 in this book, and he happily says that he is free from his family's curse, because no-one has called a spirit animal after the age of 13. He then finds out that his father has died, and releases that he wants a spirit animal, and know which one. He finds the salt water crocodile that he encountered the other day and forces a bond with it, via the bile.

Shane has taken the talismans from the Greencloaks and tries to survive in the Niloan jungle with a boy named Achi.

Shane seeks revenge on his former mentor Yumaris who he blames for killing his sister.

Shane is captured by a former Conqueror named Maddox.

At the very end, Abeke and Rollan are rescued by the Redcloaks. The only Redcloak with a plain mask volunteers to escort Cabaro and Kirat to their boat. Abeke refuses, saying that she and Rollan would do so, and asks the Redcloak to return Tasha and Ninani to the boat instead. The Redcloak appeared to be wanting to argue, but he doesn't. Once on the boat, Abeke asks for the Redcloak's name. The only name (at first) that she is given is King. Then, King turns around, but comes back, slowly taking off his mask. He revealed himself as Shane. Abeke is mad at him,thinking it was him that caused the Wyrm infection, and she swings her fist, but luckily, Rollan caught her before she could punch Shane in the face. Shane looks down at the ground, stating that the time he was the Devourer was a "life time ago".

Shane leads Abeke, Rollan, Tasha and Kirat to the Place of Desolation, which is also the Redcloak base. He introduced them to some of the Redcloaks, stating that they were all transforming into their spirit animals, because of Gerathon's Bile. Shane then introduced then to Niri, who summoned Mulop. He tells Niri to converse with Kovo, but then is interrupted by the notice that Zerif has found them. He quickly makes a plan, telling Abeke, Rollan, Tasha, Kirat and others whom have lost their spirit animals to go underground and hide with Niri. He promises it would work, and promises himself he would win Abeke's forgiveness, no matter how long it took.

But Abeke does not obey the plan, and later helps Shane's archers by shooting possessed Greencloaks. A cannonball lands close to the tower the archers were firing on, and Shane jumps on top of Abeke to protect her from the bolder. After, as Abeke is called underground for a message from Niri, Shane was thought to be following her.

Abeke sees Uraza, whom was still possessed by Zerif, and the leopard attacks her. Shane, who was wearing his mask and cloak, knocked Uraza to the side of the cavern wall. Uraza bit Shane on the side, Abeke shot Uraza, then she summoned in passive state by Zerif. He tells Abeke: "I... saw Uraza running toward the tunnel and I was afraid she might... hurt you." He then coughs out blood, the continued, "I... I'm sorry, Abeke. I'm sorry for everything." And then he dies and Abeke mourns him. All he wanted was her forgiveness. He now has her forgiveness but it costed his life. 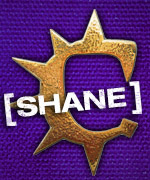 Retrieved from "https://spiritanimals.fandom.com/wiki/Shane?oldid=29849"
Community content is available under CC-BY-SA unless otherwise noted.