Single-player quests have four difficulty levels: Casual, Normal, Challenging, and Heroic. Casual quests are free, while Normal and Challenging quests cost gold; you also have the choice of using Greenheart tokens to play a Challenging quest. Heroic quests are presented with each level you progress, and usually involve a boss battle. A new Heroic quest will not appear until you complete the previous one.

A player can go on quests in Nilo, Zhong, Amaya, Eura, or Sadre. Sadre quests can be accessed by talking to Worthy in the courtyard.

Each region has its own set of bile animals. The bile animals will typically be 1-3 levels higher than you, but are fairly easy to defeat. Some animals also have special attacks, such as:

The difficulty of a bile animal is determined by its color and the amount of skulls by its tag. The order from easiest to hardest is as follows: green, yellow (1 skull), orange (2 skulls), red (3 skulls), purple (boss + crown icon). These colors are indicated by the tile beneath the animal.

Heroic quests are where the story of the game takes place. With each level progressed, a new heroic quest is given, until the player defeats Drina at level 40. Additionally, if the player chooses, underground heroic quests can be completed, adding a new storyline which ends at the defeat of Maddox. Both storylines can be played simultaneously.

You can choose to join up to three other random players in a Cooperative Quest. These quests are designed in "waves", with each round increasing in difficulty. A boss is randomly chosen, along with randomized bile animals, in each wave. At wave eight, the player(s) comes to a large, circular courtyard. After they beat that wave, they trace their steps back. Upon defeating wave ten, there is a possibility to earn a Greenheart token.

A defeated player will teleport to an empty room and be given a countdown until they are revived and sent back into the wave. If all players are defeated, then the game is over. The option to spectate allies is available through the glowing orb pedestals, each shining with a different color. After the boss is defeated and the round ends, a menu will pop up with the results and rewards along with the next round's enemies. Items and XP can be earned each round and players on the side bar will be given a title for their performance during the wave. It will give the player the option to either continue to the next wave or leave. 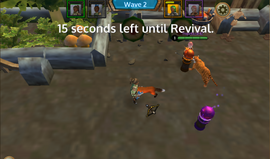 A player waits to be revived. The option to spectate two other players is shown through the two different orbs. 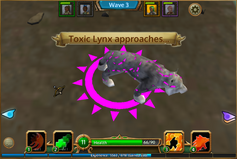 A boss is indicated by a banner above it, signaling the battle of the last round. 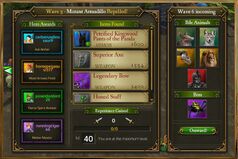 End screen
Add a photo to this gallery

In addition to Cooperative Quests, Versus Quests are also multiplayer. Four is the maximum amount of players, with two on the side of the Greencloaks, and two on the Conqueror side. The objective is to destroy the enemy's base and towers.

The game has two phases: attack and defend. During attack, one team gets four AI soldiers that attack the enemy until their health runs out. The defenders try to protect their base and towers. There are two towers on each team's side, and both are able to fire a projectile at the enemy team. Once all four of the AI soldiers are down, the roles switch.

Another feature is power-ups. One way to get them is by "killing" an opponent. When any enemy soldier is defeated, the opposing team obtains double attack power for 10 seconds. There are two areas on the map where additional power-ups can be obtained.

Retrieved from "https://spiritanimals.fandom.com/wiki/Spirit_Animals_Game/Quests?oldid=27690"
Community content is available under CC-BY-SA unless otherwise noted.