Fire and Ice
The Evertree
Tales of the Great Beasts

Mentioned in: Wild Born, Tales of the Fallen Beasts

Suka is a polar bear Great Beast. In the second series, she was summoned as a spirit animal by a girl named Anuqi. However Zerif steals Suka away with the Wyrm parasites.

Suka is a huge white polar bear with five fierce long black claws, each claw longer than a human girls' hand. Meilin estimated that five humans standing on each other's shoulders would be as tall as her. She froze herself and her talisman in a block of ice some time after the first war. After that, she was found by The Ardu. They carved a castle out of ice, and beyond that, a city out the ice surrounding her.

Main article: Talismans
Suka's talisman is the Crystal Polar Bear. It gives the user giant, invisible arms with boxing gloves made of wind.

Dinesh mentions Suka entombed in a tomb of ice.

Suka first appears in Chapter 9: Ice City, frozen in a block of ice in the great hall of the Ice Castle. She is found by Abeke and Meilin. Meilin then brings the rest of their group and Maya begins to melt the ice over the Crystal Polar Bear. This wakes Suka who breaks her prison and starts destroying the city. She was described at that time as having no intelligence in her eyes, just the wildness of a trapped predator. She then begins a spree of mass destruction and would have killed the Greencloaks and the inhabitants of the Ice City, had not Meilin used the Slate Elephant talisman to enlarge Jhi and made sure that Suka was affected by Jhi's calming powers. It works and Suka calms down enough to greet Jhi in a way befitting bears. After they touched necks Suka speaks with Jhi, the Greencloaks explain everything that had happened since Suka trapped herself. Suka expresses regret at not having helped in the war against The Devourer. She states that before she froze herself, Halawir the Eagle asked to borrow her talisman which made her wonder what would a happen if a new Devourer rose this time with all the talismans, which was the reason she froze herself as she wished to keep her talisman safe. Suka realizes that if she wants peace she must hand over her talisman to the Greencloaks, so she gives it to Rollan before leaving to hunt.

Suka along with the other Great Beasts sacrifice the themselves to stop Kovo from getting complete control of Erdas. 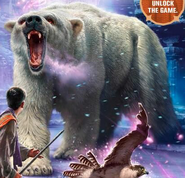 Suka on the cover of Fire and Ice 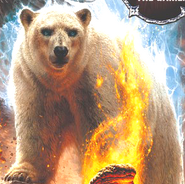 Suka on the cover of Tales of the Fallen Beasts

Retrieved from "https://spiritanimals.fandom.com/wiki/Suka?oldid=27206"
Community content is available under CC-BY-SA unless otherwise noted.