View source
watch 01:36
We're Getting Mutants in the MCU - The Loop
Do you like this video?
Play Sound

Tarik was a Greencloak who was born into a poor family in Caylif. When he summoned his spirit animal, Lumeo, his sister LaReimaja gave up her education to run the family's carpet shop so that Tarik could join the Greencloaks like he wanted.

He assisted in training Abeke, Meilin, Rollan, and Conor, also joining them on their missions. He sacrificed himself and was killed by General Gar in order to save Rollan's life.

Tarik was a tall, lean man with wide shoulders, weathered features, and semi-dark skin. He was also said to look as if he was from Southwest Zhong or Northeast Nilo.[7] He was described by Meilin to look similar to Rollan, them having the same dark hair and tan skin.[8] Tarik was mentioned to have a little lighter skin than Abeke.[9] In Against the Tide, he gets a small worry wrinkle in between his eyebrows.

Tarik was an experienced Greencloak and the main kids' teacher/mentor. He joined the Greencloaks at a very young age. His family ran a carpet shop in Caylif and initially, Tarik intended to take over the shop when he was older. However, he summoned Lumeo and joined the Greencloaks. His sister LaReimaja took over the carpet shop for him, sacrificing her bright future. Tarik thanked Reima for her sacrifice every day.

Throughout the series, Tarik was seen to be mostly serious, uptight, and calm; however he occasionally broke his serious demeanor. His bond with Lumeo reveals the playful side of him, and he cared and worried constantly for the Four Fallen summoners. In Fire and Ice, he even sang a song about seal brains to distract himself from the unpleasantness of eating them.[10] Despite his playfulness, Tarik was said by Olvan to be one of the Greencloaks's finest warriors. He was willing to give up his life for the sake of Erdas, which he ultimately did in Rise and Fall.

Tarik appears in the first chapter at Conor's Nectar ceremony. After Conor summons Briggan, Tarik introduces himself and escorts the two away to Sunset Tower where they will meet Rollan.

Later in the book, Tarik appears again with Conor and Meilin, introducing them to Rollan.

Tarik chaperoned the Four Fallen summoners and Finn on the journey to Glengavin but gets bitten by a Euran Adder. Rollan and Conor take him to Lady Evelyn to care for him.

When the Four receives the Iron Boar from Rumfuss, they come to get Tarik from Lady Evelyn's castle. Tarik was a bit embarrassed, it is not said why he was embarrassed.

Tarik was first seen training Abeke, Conor and Rollan using the Granite Ram. Rollan makes a joke about Conor, giving away the talisman. Tarik scolds Rollan for making the joke. He later pretends to be a bodyguard for the trio. When the team goes to the Inn of the Bright Moon, Tarik goes under the name, "Mosten".[11] He and the Four pretend to be puppeteers. A drunk Conqueror spots them escaping and alerts the others. The trio of Greencloaks and Rollan escape. He is overjoyed when he was reunited with an old friend, Lishay. He speaks with her, and she tells him about what happened to her brother, Hanzan. Lishay leads them through the jungle. Tarik takes the rear and looks out for them. The Tergesh spots them and Tarik runs. Two days later, when the rest of team wakes, Tarik was wearing a robe and turban. He explains to the leader of the Tergesh, Jodoboda that they mean no harm. Jodoboda laughs it off until Meilin puts a knife to his throat. Tarik was tasked with finding the banana gourds to cure Rollan as he had Sunset Death.

Tarik invites Maya to the journey in the North. Rollan talks about walruses and says that he doesn't believe that they're actually real. Tarik corrects and reminds him that they're real. A singer and her lute playing partner tells them Samis turns away visitors. Abeke suggests that she would gift them metal goods. Tarik approves of the idea and gives her a few coins. A couple minutes after, he hears commotion. He tells the rest of the team to wait at the fire Maya started but Meilin and Rollan follow him. When they get there, they see two men fighting. Tarik breaks up the fight and asks what was going on. One of the men fighting named Bill says that he got robbed. With Rollan's intuition, he sees that Jarack stole it. Tarik holds Jarack while Meilin and another trader patted him down. She finds a sack full of coins in his boots. Jarack gets banished and Tarik lets him go. As they are walking towards Samis, Conor spots caribou herders and wants to speak with them. Rollan teases Conor and tells him not to give away of the talismans. Tarik rebukes him for saying that. He later sings the Seal Brains song. Rollan and Conor were in shock because Tarik was so serious. Singing a silly song didn’t seem like something he would do.[12]

Tarik comforts Rollan when he hears the news about his mother, Aidana. He tells the team to not worry about the mole as the Conquerors could be using it to make the team stressed. Tarik travels with Rollan and Meilin to Nightshade Island. Later on in the story (close to the end), Tarik picks up Rollan (Rollan got to the ship on Essix, she was enlarged by the Slate Elephant) in the Tellun's Pride, and soon after Conor arrives there, being carried by Mulop to the ship. Tarik finds out what happened to Meilin and Abeke when Rollan tells him.

Tarik leads Conor and Rollan to Abeke's home village, Okaihee. He stands less tall, and he isn’t as sure about things as he used to be. There they meet Irtike, who helps the Greencloaks get to Cabaro. He meets Abeke’s father, Pojalo. Tarik introduces himself and Soama makes an annoyed sound at him. He falls silent after. When they arrive to Cabaro's oasis, they find out Gar and his army of Conquerors are there along with Gerathon. Tarik sacrifices his life to save Rollan. After he dies, Lumeo kills General Gar and Renneg at the cost of the otter's life.

*disclaimer: keep in mind these were all put into Google Translate and are not accurate to real life.

Fanart of young Tarik by H-awky. May contain inaccurate elements. 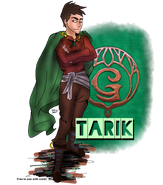 Fanart of Tarik by Ss601394. May contain inaccurate elements.