The Conquerors are an army led by the Devourer (a.k.a. the 'Reptile King'). Most Conquerors have spirit animals, either by natural bonding or via the Bile. Conquerors originate from the island continent of Stetriol.
At the end of the first series, the Conquerors had surrendered to the Greencloaks after Kovo the Ape's defeat, and Shane had stepped down from his position of the Devourer. Most of the Conquerors scattered, but some rebel groups formed; for example, Maddox's "New Conquerors" in The Book of Shane: Venture.

The Conquerors are identified by a spiked letter 'C'. They often wear black spiked armor, black being one of their theme colors. They are also symbolized by the crocodile (The Devourer's spirit animal).

The Conquerors were formed by King Feliandor of Stetriol, who was named "The Devourer" because of his spirit animal, a saltwater crocodile. Kovo the Ape was behind the formation of the Conquerors, using them as a means to take over Erdas. Feliandor failed to realize this, and after a gruesome war, the Conquerors were defeated by the Greencloaks and Kovo was imprisoned at Muttering Rock. As punishment for their war crimes, Stetriol's forests were burned and their naval fleet was destroyed.
Generations later, Stetriol was still a barren wasteland and the Stetriolans began to suffer from the bonding sickness. Due to their fleet being destroyed, nobody could leave the continent, and the Greencloaks neglected to share the Nectar of Ninani with Stetriol. Shane's family wanted to change this. Shane's uncle, General Gar, began to rebuild the fleet, reserving all of Stetriol's wood to do so. Zerif approached Shane after deliberately getting arrested, and told him that he knew the cure to the bonding sickness. It turns out to be a substance called the Bile, which is made using Gerathon the Serpent's talisman. Gerathon can also spray it out of her mouth as venom. He also tells Shane that the Greencloaks had been curing the sickness for generations, and left Stetriol to suffer. With this news, Shane is angered and decides to drink the Bile and bond to a huge saltwater crocodile he named Grahv. He raises the Conqueror army, just like his ancestor Feliandor had, and the Second Devourer War begins. With their newly built fleet, the Conquerors begin to ravage the world for the second time. Kovo and Gerathon were involved once again, and Kovo was able to trick Shane into leading the army for him. Halawir the Eagle also sides with Stetriol. In the end, the Conquerors are defeated by the Greencloaks once again and Kovo, Gerathon, and Halawir are killed. Shane steps down from his position, and the Conquerors scatter.

The Book of Shane‘s cover page depicting the Conqueror symbol

A letter from the Conquerors

Conqueror Boss in the game 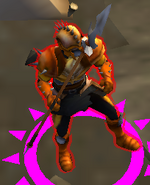 Conqueror boss in the game (multiplayer) 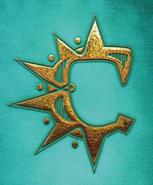 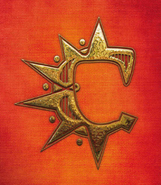