The Greencloaks are a group of Marked individuals (people with spirit animals) who fight against evil and train to bond better with their spirit animals. Their current leader is Olvan, and most Greencloaks live in their base; an island off the coast of Eura called Greenhaven.

Rollan believes that they push too far when it comes to responsibility and destiny. Monte and Barlow tell Tarik they should stop pushing kids into battle and training, as they had been recruited as kids themselves. The Conquerors also think that they are too secretive with the Nectar of Ninani. Meilin is privately impressed with them; she likes the fact that the Greencloaks allow Marked women to join their ranks, unlike the Zhongese army. Greencloaks do not usually get married, as revealed in Broken Ground, most likely because it could distract them from their duties.

During the first war against The Devourer, the Conquerors moved in on the Vendani people of Nilo, who were goat hoarders. They killed off their goats and left, taking and destroying everything. One member of the Verdani, Tembo, started a small resistance with other victims of the siege. They wore green cloaks to blend in with the grasslands of Nilo, which often messed with the Conquerors. Later, they were named the Greencloaks. Thus, when the Four Fallen joined them the army of Greencloaks grew, more and more Marked people coming to join and fight against the Conquerors.

Letter from the Greencloaks: Series 1 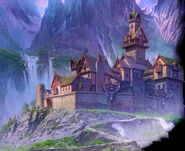 Greenhaven, the Greencloaks' home base

A Greencloak in the Game
Community content is available under CC-BY-SA unless otherwise noted.
Advertisement