Xanthe is a Sadrean girl who lived in the underground city of Phos Astos. After the events of The Burning Tide, she went to live with Takoda in Maktaba.

Xanthe had lived in Phos Astos underground her whole life, and she is very proud of everything her city has built out of fungi and large mushrooms. Her city and all the other cities in Sadre have built thousands of tunnels going all over the world, and she knows the tunnel way to The Evertree by heart. After she leads Takoda, Meilin, and Conor across the musical web, they are forced into the Sulfur Sea when Kovo slides into them except for Xanthe, who is assumed to have disappeared. She returns in The Burning Tide with an army of Sadreans, using thoughts of Takoda as motivation to keep her going.

She appears to be a lot more cheerful when she goes to live in Maktaba, but it’s noted that her eyesight has changed because of how bright it is compared to the perpetual darkness of Phos Astos. She doesn’t hesitate to kiss Takoda on the cheek when she leaves to guide the Four and Anka to Stormspeaker. She knows the savannah very well now but has to wear a special cloak to protect her pale skin from the sun.

When Xanthe, Anka, and the Four return to Maktaba after they find Stormspeaker, Takoda is threatened to be killed, and Xanthe runs straight to his aide. Sid gets ahold of her, and when he isn’t given adequate information, he stabs her. Jhi manages to heal her and she’s taken away to Greenhaven, but we don’t know whether she survived from the blood loss.

Xanthe has pale, ether-white skin, short pale white-blonde hair[1], and soft pink eyes.[2] They have also been described as pale pink. [3]Her eyes are extremely sensitive to light brighter than a faint glow. She is described to have delicate[4]small hands and a delicate accent, unlike anyone else in Erdas.

While she helps Conor, Meilin, and Takoda travel through Sadre, she wears a pack on her shoulder.[5]

Xanthe appears shortly after the Many attack Meilin and she rescues Conor, Meilin, and Takoda from being killed and brings them to the tunnel way on to Phos Astos. She tells them about Sadre and its pathways. She then shows them around Phos Astos and introduces them to the Elders who explain their history, The Many, and the Wyrm to them. When the Many infiltrate Phos Astos, Ingailor is killed after he saves Xanthe’s life. She’s distraught after her city is destroyed and is comforted by Takoda. At the end of the book, Xanthe agrees to lead Conor, Meilin, and Takoda to find and kill the Wyrm and save The Evertree.

Xanthe, Meilin, Conor, and Takoda continue to travel through Sadre. She guides them to a place where the cave splits into two paths. Although they originally try to take the left path, it is filled with the Many, and they have to return to the split, and take the right path (which is much more difficult to take than the left one), where they must pass three "trials". She tells them of the first two: the Archane Fields and the Sulfur Sea, but does not explain the third. While the group attempts to cross the Arachane Fields, Xanthe is separated from Conor, Meilin, and Takoda, leaving them without a guide in the Sulfur Sea.

Xanthe appears near the end of the book with an army of Sadrean warriors to assist Meilin and Takoda in holding off the Many when the Wyrm hatches. Xanthe briefly recollects how she survived after being separated from the group, having made it almost entirely because of her determination to save Takoda.

When the Wyrm hatches and grabs Takoda, she attempts to help him, although Kovo beats her to it. Meilin asks her for help ringing the bell, as she cannot lift the mallet on her own. Xanthe does so, and together they ring the bell (although the snare is jammed), opening the portal to Erdas for the Wyrm.

Abeke mentions in the epilogue that Xanthe and Takoda came out of Sadre holding hands.

Xanthe is extremely elated to see her old friends–Conor and Meilin–along with Abeke and Rollan when they come to Maktaba. She helps them look for any records on Stormspeaker and doesn’t seem to mind when Meilin allows Jhi out, which goes against Takoda’s orders to keep their spirit animals in passive. She encourages Takoda to go into the library that only he’s permitted to, and although he’s reluctant at first, the simple gesture of touching his arm seems to convince him.

When it’s revealed that the Oathbound are coming for the Four, Xanthe decides to accompany them and guide them through the savannah. When Takoda tries to get her to stay (he can’t go with her because of Kovo), she kisses him on the cheek and assures him that she’ll be fine.

They run into a cackle of hyenas and successfully beat them. When Abeke suggests that they fake their deaths to throw the Oathbound off their trail, Xanthe throws her cloak in, despite her needing it to protect her from the Niloan sun. She says that Sodu may have taken one of her possessions and given it to the Oathbound’s dogs, which would mean that they could sniff her out more easily than the others.

She then guides them when Rollan opens up a tunnel with the Heart of the Land with her ability to sense Erdas’s magnetic fields. They pause to let Rollan rest and Xanthe asks about Stormspeaker. Nobody answers her, and she says that she must now be worthy of that knowledge, which reminds the Four of Worthy. They explain the Heart of the Land and the Wildcat’s Claw, but when Xanthe presses further, Anka says that they can’t tell her everything. She’s clearly miffed that they refuse to tell her anything and asks in a petulant tone why they can’t just tunnel underneath of the mountain. Rollan explains why.

They resurface and Xanthe goes off with Conor and Abeke to find a safe passage through the mountains. Xanthe leads them to a cave system that goes almost all the way through to the other side and suggests using the Heart of the Land to get through the rest of the way. Her idea works, and when they emerge into the Valley of Skulls, she decides to leave the group and hide out in the caves so that they don’t have to wait until nighttime to travel.

Conor, Abeke, Meilin, Rollan, and Anka find her again, thanks to Essix’s vision. She asks about Stormspeaker when they enter the cave she’s in, and Abeke quickly claims that Meilin has it, when Abeke is the one who actually possesses it. She then presses them about what their plan is if Takoda hasn’t found any information about the Dragon’s Eye, and when Abeke tries to change the subject, Xanthe brings it back again. Rollan explains that they can’t tell her everything, which miffs her again. She says that she hopes they aren’t repeating the Greencloak’s mistakes of the past, like how they hid the secret of the Nectar of Ninani.

Meilin spots a fire. Xanthe realizes that it’s Maktaba, no doubt targeted by the Oathbound. When Abeke takes out Stormspeaker, Xanthe is momentarily confused, since Abeke claimed that Meilin had the relic, but then, she realizes that she’d been lied to. Meilin asks what’s going on, but they say “nothing” and head for Maktaba.

Takoda and Xanthe become good friends throughout Immortal Guardians. Takoda accidentally bumps into her when they are travelling to Phos Astos, and Xanthe blushes. There is a small bit of evidence that they may like each other, and this is most likely due to the fact that the Sadreans admire Kovo, who is bonded to Takoda. 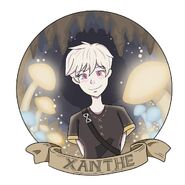 Fanart by Paladine on the SA Amino (used with permission). May contain inaccurate elements.